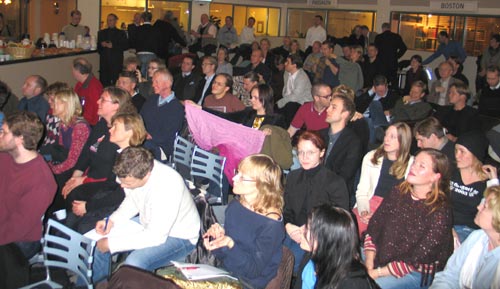 Today I’m going to do something I don’t like when other people do. I’m going to write about blogging.
People seem to like reading that kind of posts, though, judging from which posts get the most clicks on intressant.se.

I went to Bloggforum today – a seminar on blogging in Sweden. It was held at IDG and the initiative comes from two very active bloggers – Erik Stattin and Stefan Geens.
I met quite a few people I know and was introduced to others that I knew only by name and/or face, and still others I didn’t know at all. That’s one of the good things about a gathering like this, all the contacts. I also ran into Stefan whom I hadn’t seen for some five to ten years before running into him at Sagateatern on Lidingö last Friday. Odd.

The debate was in three heats. On Politics, Knowledge and Media. The panel was predominantly male – quite a lot of suits. That’s not what the net is about, imho.
Rosemarie Södergren, better known online as Chadie, and Stephanie Hendrick, a researcher at Umeå university, were the only female voices, but also among those making the most sense.

Overall I thought the focus on politics and blogging as a way to express political opinions dominated the debate, which was a bit of a shame. I’ll willingly admit that I’m not very interested in politics. Atleast not in party politics. People are what move me, and personal development and expression. Very little was said about that. Instead the big issues.. blogs vs the traditional media, blogging as a way of shaping public opinion, who sets the agenda, blogging as a way for companies to reach customers etc etc.
The media debate, moderated by Mark Comerford of JMK, was interesting but depressing. PJ Anders Linder was the only journalist in the panel – the other being into PR – and what he does at SvD is hardly a blog in the strict sense of the word, since he doesn’t allow people to comment on his texts. In my world that’s just publishing texts online during the day – what any online paper does, this just happens to be in the editorial section.

Mark had some good points about the need for journalists to blog. About opening up to criticism in that way.
What I don’t know about is the need for it to be done in the names of the traditional media companies. Already a lot of journalists do blog, and what they bring to the “blogging sphere” (how I hate that expression) is among other things the tools of the trade. Checking your sources, making priorities in your writing, general writing skills etc.

I’ve been writing this diary—>reload—>blog(?) since January 1998, and it’s basically the same now as it was when I started. Perhaps it’s perspecitve has widened a little bit – away from the private sphere. But the core is the same. Blogging is not a new phenomenon. The fact that it’s grown this big is interesting though, whether you like being a semi-forced part of the “blogging sphere” or not.