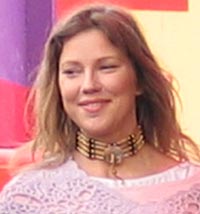 It’s been awfully quiet about Meja the past few years. But today she performed at Gröna Lund, at the Childhood gala. One new song (I suppose!) and “All about the money”. I wonder what she’s been up to, and if there’s a new album coming.

Other performers at the gala were Nanne Grönvall, Shirley Clamp, Alcazar, Peter Jöback and Daniel Lindström. Queen Silvia was there – she’s the founder of the Childhood foundation.
Some photos can be found here.

Going to Gröna Lund marks the start of summer, and though it was a cloudy and not very warm day, it felt good. A lot of people were out walking.

Update: It turns out Meja actually released an album in March 2004 – “Mellow”. Haven’t heard anything about it though, so maybe she’s focusing on her Japanese career.