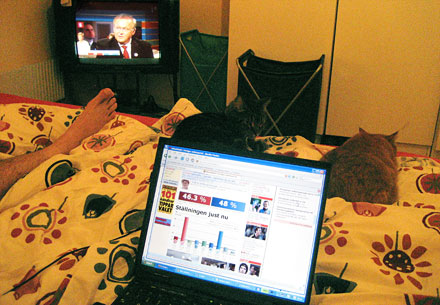 Yesterday’s election was just as nerve-wrecking as had been predicted. K and I watched the results come in in bed, on val.se, aftonbladet.se and on tv. Sigge did a good job reporting about the blogosphere’s (or rather aftonbladet.se’s bloggers) reactions.
Finally it became clear that the 12 year social democratic rule had come to an end, and we’ll have a new alliance government. I think it’s good.