Brussels with a sneeze Brussels wasn’t like I had expected it to be. Most of what I knew about it, which admittently wasn’t much, was from the tv news from the European Parliament. So I had pictured the Belgian capital to be very modern, with high-rise buildings, hurried people in suits and posh shopping malls. True, there were some of that – the very upscale Royal Galleries St. Hubert and the European parliament sure fit that picture – but downtown Brussels is a mix of old fairly low buildings, some of them quite run-down, and more modern structures. New construction doesn’t seem to consider the surrounding area’s architectural style at all, which has led to an interesting mix of old and new.
Right next to the parliament area we saw a row of old houses that were completely blown out, probably scheduled for demolition. It’s a city of contrasts. I was happily surprised to find a large number of street markets throughout the city – from the tacky but funny Jeu de Balle, selling just about anything that you’d think nobody would want to buy, but where people are buying just the same, to the artist market at Marché aux Herbes and onto the Sunday market, busy, bustling, huge, at Gare du Midi.
Unfortunately I had a rather bad cold the whole trip, and it was especially bad on the Sunday, so when we had got to the center of the market I started feeling very weak and needed to sit down. However, there were no benches to be found, only people everywhere, pushing and shoving, loud noises, stalls in every direction. We had to walk for a long time just to find our way out from the market. When I finally got to sit down at a bus stop I was completely exhausted.
For a born shopper like myself that was quite a setback. K asked if he should try to find a cab to take us back to the hotel, but I didn’t want to give up that easily. So I said I just needed to sit for a while. Also, I found a severe cold and flu pill in my backpack, so I took that and rested for some time. Then, still a bit dizzy, but feeling slightly better, headed back to the stalls.
It was quite good shopping, and had I felt better I would have bought more. I ended up with a dark purple autumn/winter jacket, a red fake leather jacket, and two scarves.

K and I stayed at a hotel focused on art, the Siru. Some of the rooms looked quite spectacular, but ours only had some metal “balloons” in the ceiling. Though the view from the top floor was nice. And I liked the paintings in the corridor, influenced by the Matrix.
At night we could hear lots of sirens. Either Brussels is a very violent city, or the hospital/police dept/fire dept were nearby our hotel.

Another prominent feature of Brussels is cartoon-painted walls of houses, many of them featuring Tintin. Here are a few of them:

Monday we went on a daytrip to Brugge/Bruges (everythingh in Belgium has two names, since the country has two official languages). It was a very fine day, sunny and you almost felt spring in the air. I was still sick, but sipping hot chololate in the sun on a cute square made me feel a bit better. 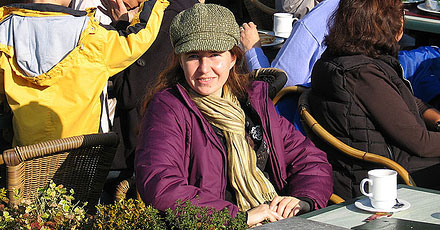 Bruges is a medieval town that used to be important until the river got too narrow for ships to travel to it. It’s quite well-kept, and you can see that it’s a tourist town from all the horse-driven carriages and boats that take you on trips on the canals.
We spent the day walking around, having a three course lunch at a nice place by one of the canals, taking a boat-ride, taking loads of photos, sitting on a bridge and just enjoying the nice weather. Here are the photos from Brussels and Bruges