While sitting at the airport in Ponta Delgada sipping galão (coffee with lots of hot milk), it’s time to sum up our trip to the Azores. We’ve had a great week, done plenty and still have had time to relax. Renting a car for the whole week was a good idea. Despite some quite horrific overtakes we could return the car without a scratch. 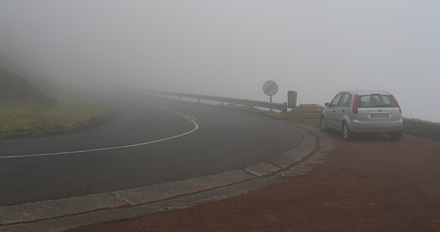 In some areas we had to drive through clouds, since they were low and we were up in the mountains. This was why we didn’t get to see Lagoa do Fogo, for instance. We did stop at the lookout points, but all we could see was a few meters ahead of us, and then all was a whitish grey.

At other times we had to stop since cows were in the middle of the road, and at a number of occasions we saw horses and donkeys used as a means of transportation. It seems a bit primitive, which is meant in the most possitive sense. And a huge contrast to Parque Atlantico, the modern mall in Ponta Delgada which has all the usual modern facilities and is open til 23 even on Sundays.

We had dinner at the mall yesterday, and were surprised that the Italian restaurant by the food court held such high quality. The food was great, which might or might not say something about the food we’ve been eating earlier in the week. Don’t get me wrong, some or most of it has been quite tasty, but it’s a lot of fish… and some combinations are quite weird. Like red cabbage or carrots on top of a kiwi fruit. Or the combination of french fries and rice served with meat dishes. 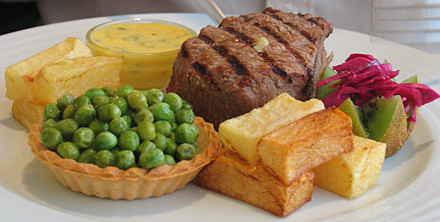 Our hotel, Caloura Resort, was right by the sea, and we enjoyed the privacy our balcony got us. Quite a few evenings we could stand outside in the nude watching the stars. Here in the middle of the Atlantic you can see them clearly, many more than at home. A beautiful sight.
Accompanying the stars at night were the “weird birds”. We still haven’t found out their English or Swedish name, and I’ve no idea how the Portuguese name is spellt, so I’ll just keep calling them weird birds. The weirdity isn’t in their look but in their sounds. They sound like Donald Duck on speed interpreting a diggedidoo.

We’ve been almost all over São Miguel. The longest day trip was when we went from Caloura/Agua de Pau up to Lagoa do Fogo, on to Caldeira Velha – a waterfall you could bathe by, with warm water from a hot spring in the ground – on to Ribeira Grande. 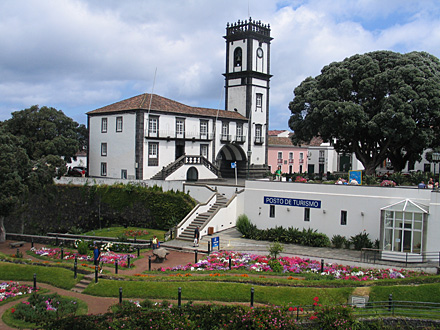 There we made a stop by the liqueur factory and bought a couple of bottles. We had a sandwich at a cafe close to the square, then headed east. 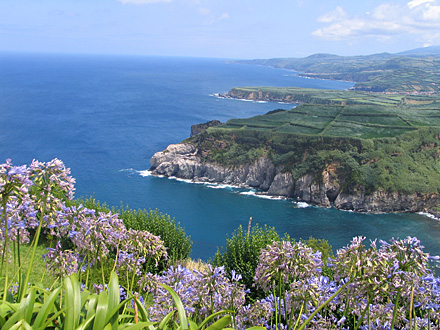 The coastline in the north-east is the most pretty, and we made frequent stops at lookout-points along the way. 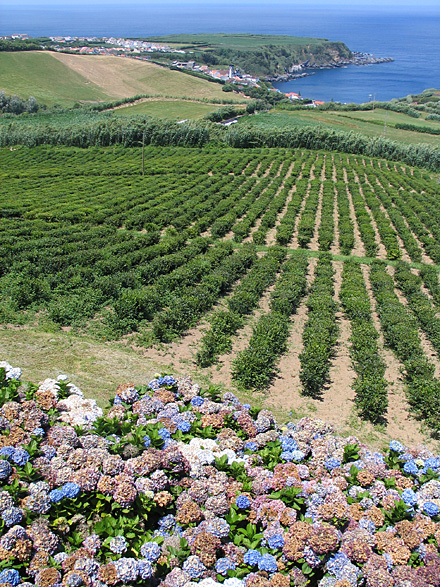 We also visited the island’s two tea plantations, the only ones in Europe. Porto Formoso is the new one. The daughter in the house took us for a tour and told us about the tea making, though we didn’t hear much of what she was saying because of the noisy machines. Still it was nice to see. The machines they are using now are more modern than the ones they started out with, she told us. I tried not to smile thinking about the huge difference between this low-scale old-fashioned tea factory and that of Celestial Seasonings that I visited in the States. 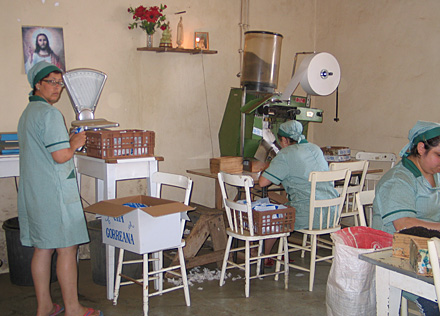 Gorreana is the older tea factory, dating back to the 1880’s. They still pack the tea by hand, and stepping into the packing room where six women in green and white coats were carefully measuring the tea and sealing it in bags took us back in time. 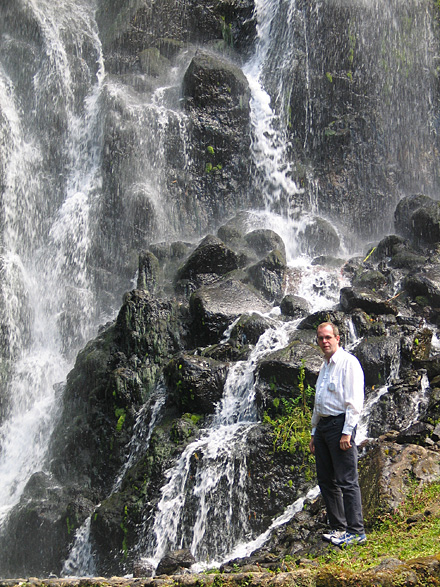 From Gorreana we continued eastwards. We made a stop by a pretty waterfall and a mill, then went around the northeast, into Nordeste and Povoacao where we had coffee but didn’t manage to taste the local sweet, fofa. We did get to see a small zoo, where K befriended a small wet kitten. 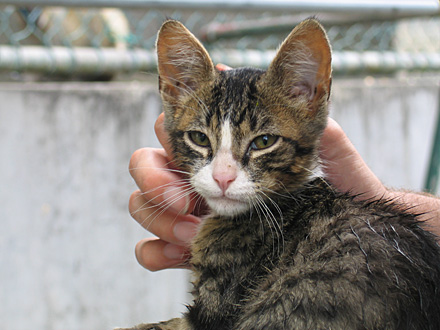 We had dinner in Vila Franca do Campo, at Estrela do Mar, a restaurant overlooking the sea.
It was a long day, and we were quite tired when we got back, but it was also one of the most eventful days with beautiful sights.

Other days, like yesterday, we relaxed in the sun. From Vila Franca do Campo we went by a small boat out to Ilheu de Vila, an island with a lagoon. The water was cold but not too cold. When we got there we were the only tourists there, along with a Norwegian family. Starting out early in the morning was a good idea. Later the lagoon filled up with the boatloads arriving every hour. 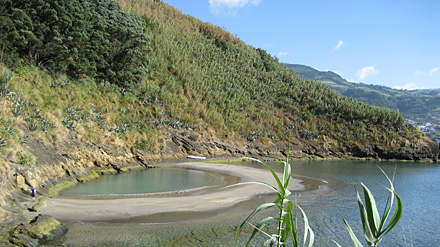 The lagoon had inlets from two directions. One where the boat took us in, and the other through a crevice in the rock. This meant that two sections of water were separated by a small stretch of sand. As time went by, the water rose and the sand was swallowed by it. But when we got there it was like a big pool and a kids pool. The small one had a much steeper decline and nicer sand, while the larger one had some rocks with seaweed, but in return you could see fish there. I spotted a 15 cm long clear blue fish. Very pretty. 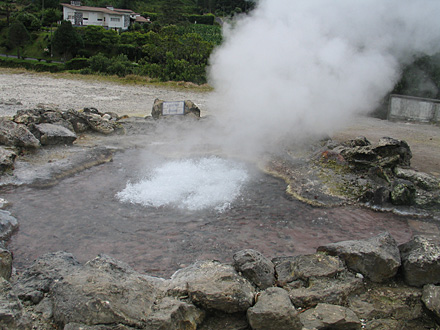 We’ve also visited Furnas, a volcanic active area with hot springs, caldeiras, sending off a terrible smell. The water is full of sulfur, and it smells like rotten eggs. 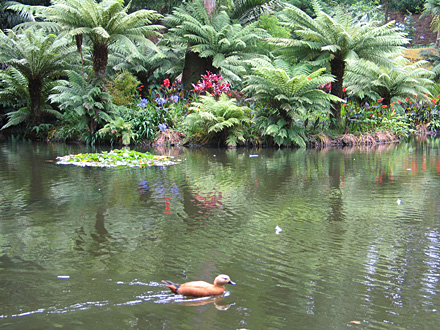 In Furnas there’s a pretty park, Terra Nostra, where you can have a bath in the “spring of youth”. I’m not sure we got any younger, but the water was warm and nice even on a cloudy day. 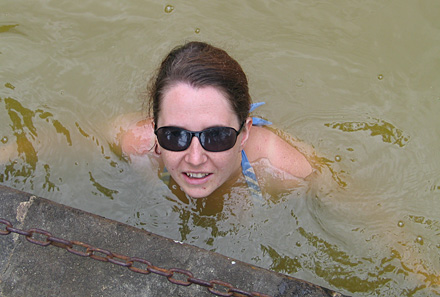