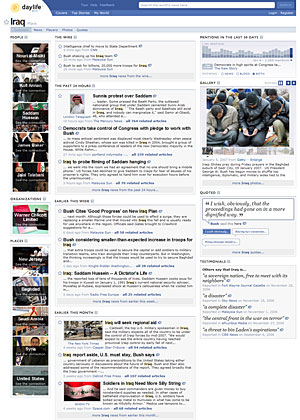 In my previous post about the News Coverage Index, I used a new tool called Daylife, a news-gatherer which also analyzes and organizes news according to connections, topics, timelines, top stories and also they of course offer search. They call it a platform, and it’s possible to add Daylife to other sites, like the Huffington Post has done.

Jeff Jarvis, who’s been helping this startup out, has more:

Note that the only thing that is created by editors is the cover you’ll see on the home page. Everything else is automated. I’ve been saying that I am the only editor on earth who is not building an empire. But that is just why it has been so exciting to work on Daylife, to collaborate with an incredible technology team assembled by founder and CEO Upendra Shardanand as they find new ways to analyze, understand, display, and distribute news. I believe that what this does in the long run is send people — and thus support — to journalism at its source.

TechCrunch‘s Michael Arrington was less impressed though, critizising the lack of RSS feeds and comments fields. RSS feeds will be included in an upcoming release, responds Jarvis, but wonders whether comments funcions are necessary when you can comment on your blog (atleast that’s the way I interpreted it): “Is the use of the platform on sites everywhere a rich form of interactivity itself? What is the best form of interactivity on the site: comments or contributions?”

For a quick look at Daylife, you can take the tour.

Update 2007-01-06:
Dan Gillmor on Daylife: “It’s a very promising start to a useful service. If they get it right, they’ll be Google News done the right way.”