Back at the Bowery – slam night 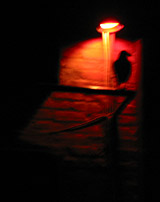 Eureka! you cry
And die

Yeah, I met an old hippie at the bar. Worn, pink t-shirt, neclaces hanging down on his stomach, drugged out, talking to the bartender about being on a vacation and not having money for beer, but boy did the Guiness I was drinking look good. Perhaps he wanted me to treat him to one. I didn’t.

I got to be a judge at the slam. There were about four really good poets, and they were the once making it to the semi finals, so I guess I did a good job. The evening’s winner was Moonshine, a big man, lots of hair, cute – the Bowery’s bartender.

When I got back to the apt, Ping hadn’t had dinner. Neither had I, so we had a midnight dinner at a French restaurant that’s open 24 hrs a day. They had the Graveyard menu out – between 24 and 6am. :-)

Earlier in the day I met Pontus for lunch at the Risotteria on Bleecker. I was planning to take a slow walk there, with stops at both B&N and Shakespeare & Co bookstores, but the walk took longer time than I had expected. I did go to B&N, but only for a short while. Instead I went back in the afternoon, after having strolled through Soho and Chinatown, and stayed for hours. I planned on buying two books, but after having read a little in them decided against it.
Then I found another bookshop – Strand – on my way to the Bowery. Nice place. They deal mostly in used books and offer good deals.

The night before last I met Anders and his colleague Thomas after they got off work. We went to a cosy restaurant/pub, the name of which escapes my mind, then on to their favourite hangout – Hudson Bar & Books. Nice place – lots of bookshelves on the walls.