Last year I spent a few nights in hostels in London and Chicago. It struck me that some of the guests were clearly staying there while working in the city.
These were stylish, modern, fairly comfy hostels with four beds per dorm (pics further down). Of course the usual discomforts when staying in a hostel applied: noisy people, no private space, a lack of power outlets, broken showers. But on the whole, not a bad stay for a few nights, as long as you minimize the time you actually spend in the dorm. More often than not I was the last one to arrive, so I was of course part of the disturbances myself, though I tried to keep my noise down to a minimum.

Now I am very curious as to what my home-town Stockholm has to offer. But before I start this experiment, come Monday (apart from my now two time stay at Skanstulls hostel), I’d like to take a more global perspective of staying in hostels while working.

This is of course a very different experience if you are a hard-labour worker or a woman working in the textile industries in some other parts of the world, like in Asia where I found that kind of hostels in India [1] [2] [3] and Malaysia. Probably some other countries too – feel free to fill me in. Some of them are specifically for foreign workers while others cater to people who come from different parts of the country.

Hostels for workers are not a new idea. Check out this image from the year 1900 from a hostel for factory workers.

I quite enjoyed my stay in London’s SoHostel last fall, though it did come with its share of noice and lack of sleep, broken down bathrooms and whatnot. Still, it was in the heart of SoHo and had a good vibe. Atleast one guy in my room was clearly staying there while working.

Here are some experiences from another Londoner, teacher Ed Kiely, who tried to stay in a hostel dorm to lower his rent. “Rooms go for as little as £8 a night in London’s hostels, but is it worth it for all the early-rising bunk neighbours, lack of privacy and conspicuous masturbation?” he asks in this blog post.
He writes about how long-term hostel stays affect people: “A lack of private space clearly affected people. You could spot a No.8 veteran by how they obtained privacy. One had wrapped sheets around his bunk to create a gloomy den. Another wore expensive, custom-fit earplugs whenever he was in a public area. I saw a third eating her meal in the kitchen. She had tucked her plate into the furthest corner and twisted her body round, facing away from everyone else as much as physically possible.”

Yep, you have to come prepared. I have a huge scarf that can function as a curtain if I get a lower bunk, giving me a little privacy (as depicted above). And of course earplugs and an eye mask.

There’s also the question of mixed or female only dorms. While most hostels offer mixed dorms, some also offer female/male only, which for some reason often is more expensive. Might be worth it though if you feel uncomfortable sharing your sleeping quarters with a dude.
While googling I came across this list of female-only hostels around Europe.

In Australia, a working hostel is a hostel where the staff helps the guests to find work. It might turn out you get a job at the actual hostel, but more often they help you find job elsewhere. The same goes for New Zealand.

In southern Africa hostel beds are offered to contractors, shopfitters and miners, among other work groups.
The same goes for Russia. Here’s an example from outside Moscow.
The history of migrant labour hostels in South Africa is one of violence, as this book, A bed called home from 1993, depicts.

Closer to home, I found this workers’ hostel in Raisio, Finland.
“RSF Village Raisio offers effortless and quick accommodation for a day, a week or a month – for exactly as long as you need it. At the moment, our accommodation options cover over 200 beds and our capacity continues to grow.”
I like the idea of capsule beds, having the opportunity to close a shutter around your sleeping area.

Even if hostels are not advertised as workers’ hostels, you may find workers living there, as this latvian woman found out in Slovakia.

In the US, staying in a hostel while on a short work contract seems quite common, if I’m to judge from my experiences in Chicago last year. Both in Fieldhouse Jones, which is by far the best hostel I’ve ever stayed in (pics below)…

…and Freehand Chicago, which was quite alright, but the room was so tiny it wouldn’t fit in an ordinary pic, I had to go for 360 (which actually made it look larger). 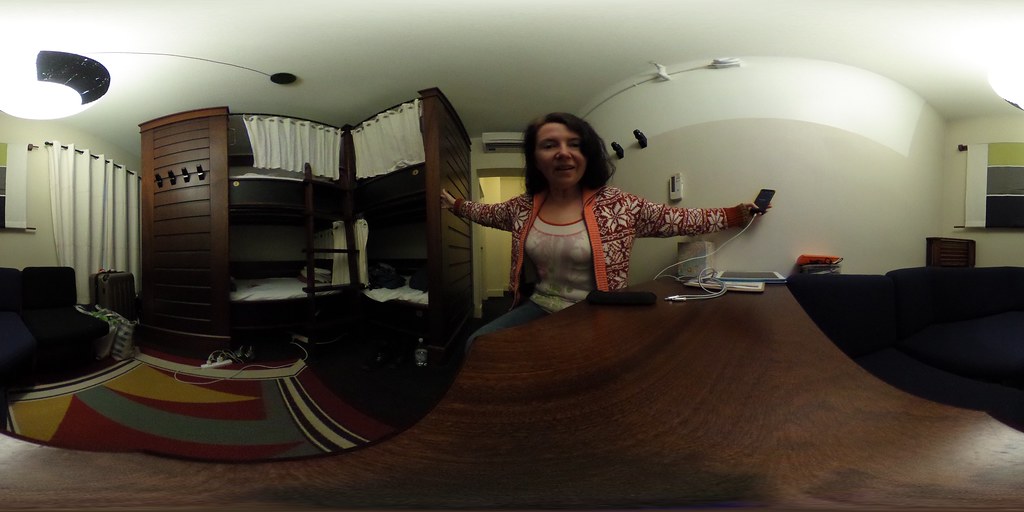 Well, this is what I found out from googling. I’m sure there’s a lot more to learn. Feel free to add your comments and knowledge to this post.