Looking back on 7.5 years at aftonbladet.se 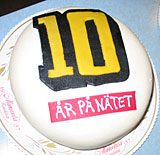 Today is the 10 year jubilee of aftonbladet.se, Sweden’s largest and most successful news site, and my employer for 7.5 years.
Already the board of the paper edition have been here and sung “Happy birthday” to us, 10 year t-shirts have been handed out, and this afternoon we’ll have birthday cakes.
In the evening we’re off for 10-kamp at Gröna Lund, then dinner at Ulla Winbladh. Should be nice, as long as the rain keeps away. The forecast doesn’t look promising.

Last night I went through some old reload posts, trying to sum up _my_ years at aftonbladet.se. This is not the official version of events – that you can find here, but some moments I think are worth remembering.