Masses of water carrying people, cars, houses, parts of unidentifyable things.
A man stuck between palm trees, fighting to keep his head above the rising water.
Young Karl Nilsson, looking straight into the camera, a dark ocean in his eyes. His whole family’s missing.
Scattered bodies washed upp on a sandy beach. The sand is smooth and there’s no other debris. The bodies are swollen after hours and days in the water. Some are badly bruised.
People running in the water as the first wave is on it’s way to shore. Further in, but still in the water, a man is standing, taking a photograph.
Dead bodies in plastic. Hundreds, perhaps thousands of them, in one place.
A young girl crying desperately as her mother is buried.
My colleagues on the verge of crying. It’s been hard work, these past nine days.
The many video sequences of the water rushing in, breaking everything in it’s way. We watch the news over and over again even when off duty. It’s the only way to take it in, to understand.
A Swedish man trying to comfort his malasian wife who’s lost family members.
Smiling faces, young, old, some babies, some grandmothers. These are the photos of the missing, that relatives have sent in, and that it’s been my job to publish and keep updated. Some you are happy to take away after a while – they have been found. Others you need to take away because they are confirmed dead. Those are the hard ones. But even harder it must be for the families who never get an answer, whose close ones will be forever missing.
Lottie Knutsson on tv, lacking sleep but untiring, working hard, not compromising, making the government listen and deliver.
A father searching for his children and his wife, looking at dead bodies in morgues, scanning the beaches.
Dead bodies in temporary coffins. Here and there arms are sticking up. Rigor mortis makes it hard for the bodies to fit the boxes.
The photos of dead faces, posted on the internet for identification.
The changed coastling of Banda Aceh. The before and after photos are scary and fascinating.
And the photos of each individual who has a story to tell about those three hours when the waters spread over the land and disaster made its way into the lives of so many people. 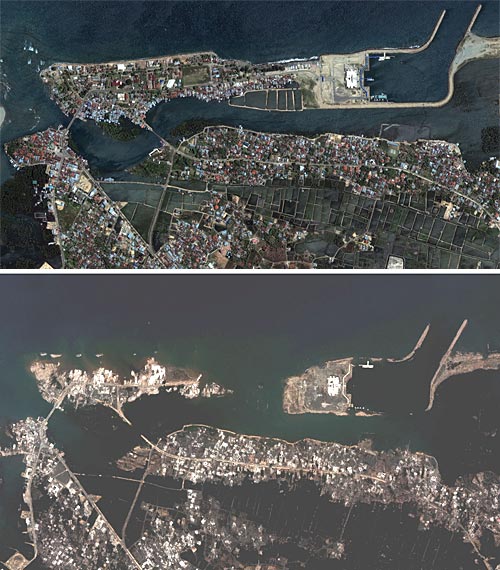 Banda Aceh, the capital of the Aceh province in Indonesia, before and after the tsunami. Photo by DigitalGlobe.