James Randi is the guy who’s offering a million dollars to anyone who can prove he/she has paranormal, supernatural or occult powers under controlled observing conditions – in a scientific test. So far he’s got to keep his million.
Yesterday Randi held a lecture in Stockholm. Plenty of people showed up – the venue sold out.
A small man with a huge white beard, Randi still has a powerful voice, and kept us captivated throughout his very amusing show – yes, it was much more a show than a lecture. With a mix of magic revealed, clips from tv shows and amusing tales, he got his message through: There’s no such thing as paranormal powers or magic – only tricks – and life in itself is so great that we should concentrate on reality and not be fooled by the trickery.
As an example of when tricks claiming to be supernatural powers can cause harm, he mentioned the Phillipine tradition of doing surgery with your hands. In a bloody clip from the Johnny Carson Tonite Show he showed how it’s done, and revealed the fake. The terrible thing is that people believe they are cured and don’t see real doctors. So they die. 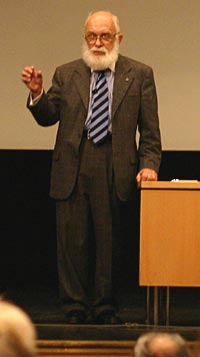 “You have to keep in mind that people want to be fooled”, he said. “You make assumptions, like that I’m using this microphone”, and then he stepped away from the podium with the mic, his voice still as loud as before. “Or that I can see you” – and he showed there was no glass in his glasses.
Randi calls himself a “psychic investigator”. He pointed out the fact that more Americans believe in psychic powers than in evolution, and the trend is towards the occult.
“We have access to nonsense much faster now – and in color.”

Other topics dealt with were crop circles, homeopathy, Larry King, believers in the da Vinci code as more than fiction, the media and Uri Geller.
Afterwards we – Marina, Frida, Benny and I – ended up at Orientexpressen for dinner. We didn’t realize time had flown so fast – most restaurants we passed closed at ten, and others didn’t have a vegetarian alternative for Frida.

Earlier in the day I had coffee with Källman. Got to hear some good news. :-)