14 kilos of candy, consumerism and our planet 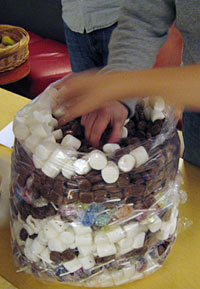 14 kilos of candy, that’s a LOT of candy. It’s also what the average Swede eats every year.
I wonder if I eat that much. Not perhaps candy, but sweet stuff in general. I probably do.
I’ve been thinking quite a bit about over-consumption these past few days. With the newly awoken focus on the environment in the press, and especially at Aftonbladet, it’s hard to avoid (which of course is the whole point).
My thoughts are not making me happy. I know I shop too much, leave electronic devices on when I could just as easily turn them off, and in general throw away far too much useful stuff. Having just been to the Czech republic and seen a different way of life, it becomes even more evident.
Tonight Swedish state television broadcast a documentary about the state of our planet. Quite depressing. And then another program about Israel perhaps attacking Iran to stop it from making nuclear weapons.
It hasn’t been a very uplifting evening. But then, reality isn’t necessarily uplifting.